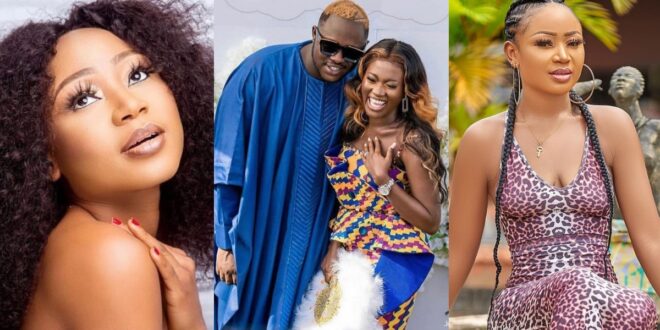 “Medikal and Fella Makafui’s wedding was not done well, I don’t hate them I’m telling the truth”- Akuapem Poloo (video)

The one-year wedding anniversary of Ghanaian rapper Medikal and his wife Fella Makafui was only a few weeks back, but the problems that surrounded the event are still ongoing.

Rosemond Brown, better known by her stage name Akuapem Poloo, a Ghanaian actress, has characterized the much-publicized wedding between the two celebrities as chaotic.

In an interview with Neat 100.9 FM, which buzzgh.com was monitoring, the notorious social media figure made the observation.

Fella took on every detail of the wedding on her own, including planning and organization, rather than finding assistance, according to Akuapem Poloo, which is why the wedding was disorganized.

One of the reasons she believes the ceremony was improperly organized was the couple’s choice of attire at their wedding, she said.

She went on to say that her previous remarks about the wedding were not made out of hatred towards Fella, but rather because she was speaking the truth.

Take a look at this video: