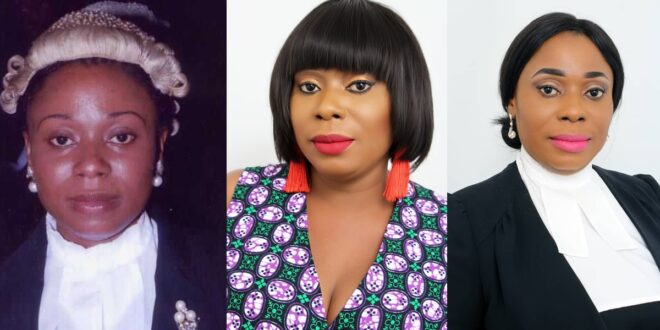 Mary Ohenewah Afful, a human rights lawyer, has admitted that she was attracted to married men at a young age when she had completely grown “heavy beasts, breasts, and curves.”

Although she formed an interest in a relationship with a single man and married at the age of 24, the worried lawyer said that this constant attraction to other married men has been her problem since she was 15.

About the fact that married men continued to propose love to her even though she was lawfully married, she claims the situation has gotten worse after her divorce in 2016.

Dating single and divorced guys, according to the Human Rights Lawyer, is problematic because she thinks “they are play boys” whose “nonsense” she can’t stand.

‘I have a problem. I am attracted to married men from age 15 when I had fully developed with heavy beasts, buttocks and hips. However I entered into a sexual relationship at age 21 then I married same person at age 24.

Now am divorced after so many years of marriage and separation. I had my divorce in June 2016 even when I had divorced alot of marriages from 2010 in the law courts, mine was hanging around my neck like a stethoscope.

Now that I am very single and free and a single struggling mother, I still get attracted to fully married men even when I was married, they never stopped proposing to me in my wedding band.

Now my biggest problem right now is that dating a single or divorced man is a very difficult task. Very difficult to handle such creatures. They are play boys. It’s hard to tolerate their nonsense.

I won’t lie that I have not dated married men. They are very good. Good giving I mean. They respond to money issues swiftly. But they are still married. How long can you hang around a married man…it’s just a total waste of time.

So to come to my biggest issue right now…Mary wants to marry in 2 months. Obviously a single or divorced man. But I don’t have a man right now. I just want God to drop a good man to me with a beautiful mansion, fleet of cars, group of companies and the rest. Not forgetting a strong energetic man, with a good performing dick, very neat, good manners and respectful.’ she wrote