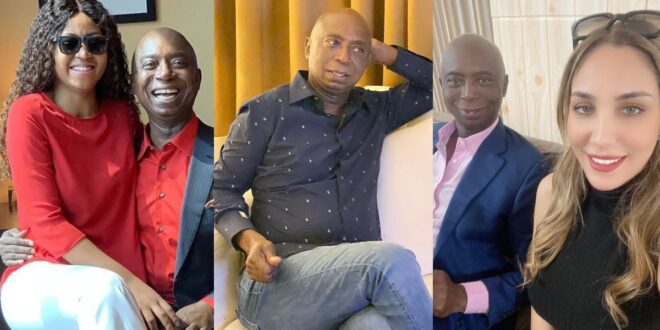 Ned Nwoko, Regina Daniel’s husband, has made a comment about why he is into polygamy.

The millionaire has admitted that marrying multiple wives is one of the most straightforward ways to revive the economy.

In an interview with BBC Igbo, the multi-business owner reported that polygamy has a variety of financial benefits, which motivated his decision to marry Regna Danniels in addition to his other beautiful wives.

According to him, marrying several women helps ensure a better economy and reduces hunger, as well as stopping women from engaging in promiscuity.

Below is his direct assertion;

“The average Northerner marrying two, three, four women, they are helping the society because it is the economic downturn that has affected so many women who you see doing prostitution and all that.

But the fallacy of it all is that Christianity does not allow that in the South and yet, the average Southern man has 10 girlfriends.” He also said the polygamist nature of northerners has helped to increase their population and made them the majority.

Nwoko also complained about how enlightenment has encouraged monogamy even though it is not our culture. “I love my culture as I know it, not as they are trying to dilute it. Igbo culture is wonderful and should be promoted the way it has always been.

But even looking at that, look at your population in Nigeria and what I will call the economy of marriage, as an Igbo man with one wife, four children, a Northerner has four wives with five children each, in the next 10 years, 20 years, imagine the population of the Northerners.”

ALSO READ  "I had Covid in December, the virus is real"- Moesha Buduong (video)