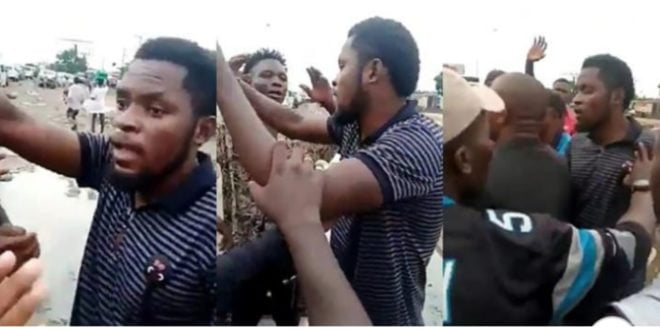 Nigerian Comedian Mark Angel has finally released a video explaining what exactly happened after he nearly got lynched by angry #EndSARS protesters as captured in a viral video.

The comedian got himself in a messy situation as he fell prey to the wrath of Port-Harcourt boys who nearly beat him for reportedly trying to shoot a comedy video in this time, despite tension and outcry in Nigeria.

ALSO, READ Nigeria guy shot to death 3 hours after saying ‘Nigeria will not end him’

As captured in the initial video, Mark Angel could be seen in the midst of these angry mobs as he tried to calm them down; saying he was not shooting any skit but was rather trying to help. He got saved by other people who intervened on his behalf.

ALSO READ  "There are millions of ladies in the world, but chose one and appreciate her"- Stonebwoy advices.

Addressing the issue, comedian Mark clarified that he was never at the scene for the sake of his skit but was misinterpreted by these angry boys.

On what actually happened, he explained that one of the commercial drivers nearly jabbed a protester and they wanted to mob the guy. He then decided to stop them and also reminded them of making sure the protest was peaceful.

However, one guy among those who wanted to beat him started shouting he(Mark Angel) was shooting a comedy skit so they should deal with him.

Watch the video which was shared on his official Instagram page below to know more: