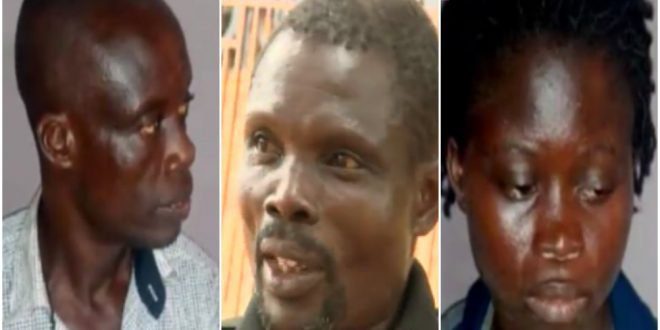 The husband of the 27-year-old woman, Mavis who Conspired with her lover to murder him at Pameng in the Atiwa West District of the Eastern Region says he has long forgiven his wife.

According to 55-year-old Cudjoe Gator, the wife has never offended her since their marriage in 2007.

Narrating what happened, he said he offered his wife lover, ‘coach’ accommodation sometime ago upon their first meeting. On Mr Gator’s blindside, the 51-year-old former Third Division football coach had begun an amorous relationship with his wife, Mavis Brepor, 27.

He stated that: “She has never offended me since we got married. Except for this issue with this tenant, who came here through Maame Ama Nyame. I gave the room to him for free, but I later sent him out when I heard what was going on between him and my wife.”

“Somebody told me he has seen my wife in an intimate posture with Mr Asare. The person said they were sitting close to each other on a bench and that heightened my suspicion. I confronted Adwoa, but she flatly denied it. So I decided not to pursue it further since I didn’t catch them doing anything. After that, I sacked him from my house,” he added.

Due to this,  planed to eliminate Mr Gator with mavis, but thanks to God intervention, they were caught before they could proceed with whatever they had planned.

Now a traumatized Gator says he believes his wife had been influenced by a spiritual force against him and he wants her freed.

“At Zongo police station, Adjoa asked the police officers to apologise to me on her behalf because she has sinned against me. She told me Asare gave her a poisonous substance to put in my food to kill me.  Though she couldn’t do it, she never told me about it. We eat together all the time,” he said.

He added that: “I quizzed her about her failure to tell me about the man’s advances to her, as she had done in other instances. She said she had found it difficult to utter the words from her mouth anytime she felt like telling me.”

Watch the Video below: