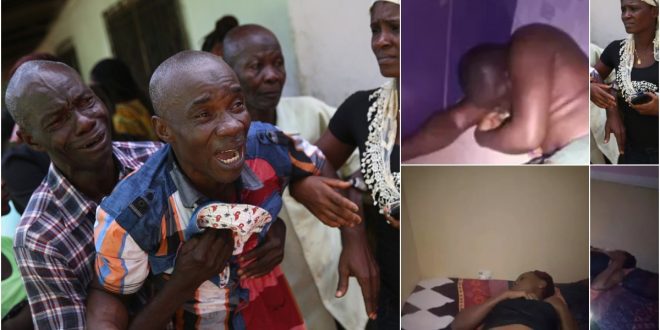 Man and his girlfriend found dead in their apartment

A man identified as Samuel Osuji and his girlfriend also identified as Cynthia Obieshi were found dead inside their apartment after making love on Sunday, June 14, 2020.

In a statement issued by the spokesperson of the area police command, he revealed that at 9 am yesterday June 14, they received a call inviting them to where the incident has occurred.

When they arrived at the compound, they had to break the door leading to Mr. Samuel’s apartment and found the lifeless bodies of Cynthia and Samuel.

according to sources, Cynthia visited her boyfriend, Samuel, on Saturday, June 13, and passed the night but unfortunately, both of them didn’t wake up the next morning.

“Preliminary investigations suggest that they may have died as a result of drug consumption.” the statement read

The photos are bizarre and may be suitable for some viewers hence viewers’ discretion is advice.