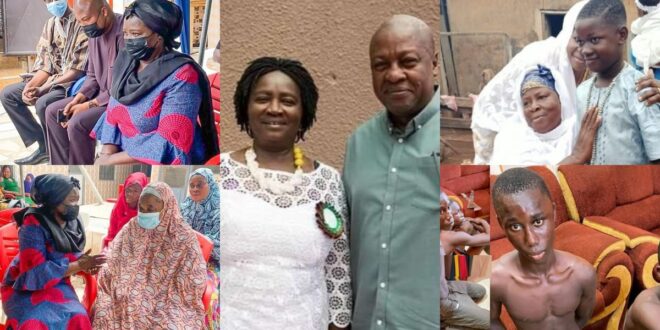 Mahama and Jane donate Ghc 10,000 to the family of 11 years old boy k!lled for money rituals

John Dramani Mahama and the National Democratic Congress (NDC) presidential nominee in the 2020 general elections, has donated GHS 10,000 to the family of an 11-year-old boy murdered by ritualists in Kasoa.

“On behalf of former President John Dramani Mahama and the NDC, we made a token donation of GHS10,000.00 to the family. This despicable episode demands national soul-searching and an honest enquiry into the direction of our country”, she posted.

Prof. Opoku-Agyemang also prayed for Allah’s protection over his family, particularly during this holy month of Ramadan.

In response to the ritual murder and the craze for acquiring swift money, the NDC stated that such acts are morally unstable and unlawful, and that they must be denounced by all.

ALSO READ  Stonebwoy speaks on what killed his twin brother

The party has called the government’s attention to the “plethora of violations whose resolution has gone on interminably, thereby promoting the perpetuation of the practice of impunity,” according to a release.

The NDC has urged young people to search for role models that are trustworthy, hardworking, and accomplished.

“Wealth which has been improperly obtained should never be an attraction for the upcoming youth of this great nation,” it said.

“In this regard, we call on the Akufo-Addo government to speed up investigations and crank the wheels of justice so that the country can rid itself of the odious reminder of this unfortunate event,” the party added.

ALSO READ  "I was a virgin till i was 24 years, i was shy"- Flavour reveals