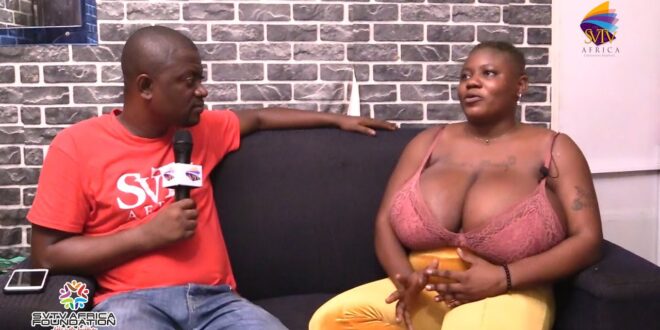 DJ Nyaami talks to Ohemaa, another lady with a big and heavy bo()bs who is in her mid-20s and mostly selling clothes online, as part of SVTV Africa’s initiative to raise the morale of ladies with big tits. 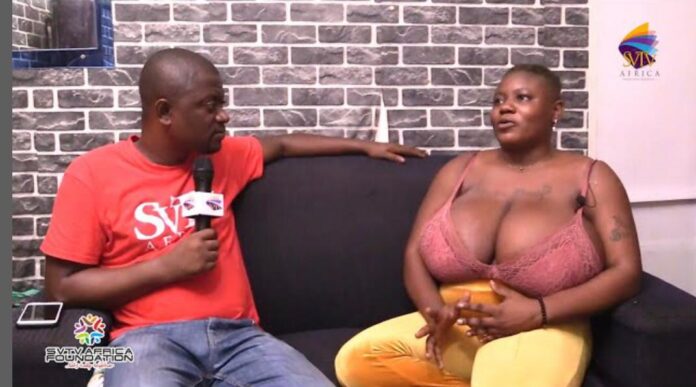 According to her, because of the remarks from onlookers, Ohemaa suggested that she did not enjoy going out much.

Since she arrived in Accra in 2019, however, she goes out whenever she pleases.

”I came to Accra with my friends two years ago. I couldn’t complete SHS because my father refused to see me through so I left home. Now, I sell dresses online, ”

when asked how people react when they see her, the heavily loaded bo()bs lady said;

ALSO READ  "I rejected his proposal but I feel pain when I see him talking to other girls"- Lady reveals.

“sometimes even children make noise and follow me but I don’t allow it to bother me. I keep going.”

She admitted that several guys hit her for hookups on social media, but she declined them. Nevertheless, she has been interested and charged handsomely in several one-night stands but she does not see this as prostitution, though.

”I’ve had sex with almost 20 guys since January. I don’t this as prostitution. I like them and they like me too, and they give me money after sex, ”