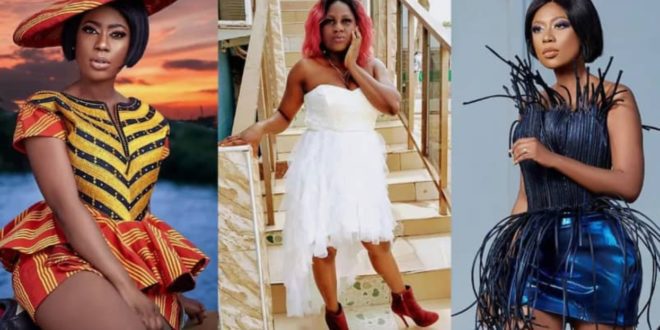 Social media user identified as Henewaa Piesie is currently weeping and begging managements after she was faced with the bad side of actress Selly Galley following a useless comment she passed under a no-makeup post of the actress.

In a leaked audio recording, Henewaa who was cursed by the actress for calling her a barren and horrible woman could be heard weeping bitterly as she poured down her heart with an apology.

She proceeded by admitting that her comments on Selly’s posts were in bad taste and she wanted to apologize through the actress’s husband. While speaking, Henewaa broke down in tears saying: “I am a human being and I have erred. I did not talk well. Please ask her to forgive me,”

The audio was a recording from a phone conversation between the embattled lady and a man called Kobby who is said to be the manager of Selly Galley’s husband, Praye Tietia.

She was forced to take this big move after her initial apology on social media was turned down by Salley. In the apology, she wrote:

It wasn’t my intention to hurt you and your family…I am really SORRY for using such words on you..find a place in your heart to forgive me @sellygellyfiawoo…G

God willing next year you will give birth…By: Nana Yaa Henewaa Piesie. Pls, help me reach Selly Galley. Thank u!!!”