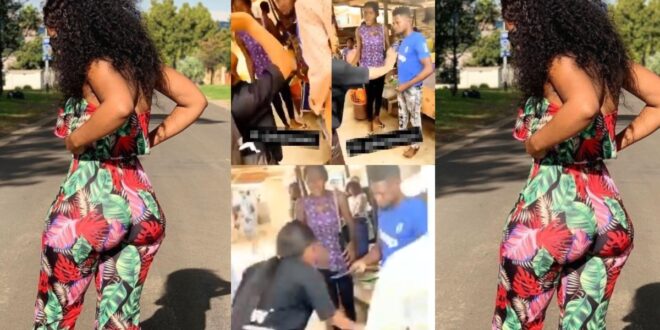 Lady slaps boyfriend, collects slippers, phone, and items she bought for him in public – Video

A video capturing the moment a pretty lady slapped her boyfriend in public after he spotted him walking with another lady is going viral on social media.

The enraged lady, who did not know the lady the guy was walking with but only saw her as a second girlfriend, went straight to him and slapped him in the face, removing his slippers, wallet, and calling him all kinds of names.

The man who had been silent the whole time explained to his lady whom he was walking with after unleashing some harsh words, but his partner also meted out harsh words to him.

ALSO READ  A beautiful lady falls in love with a “trotro” mate, she shares her story on Facebook

Just after lady discovered that the lady in question is the guy’s sister, the guy walked away with his sister as onlookers stared in awe and insulted the girlfriend for being too quick to pass judgment.