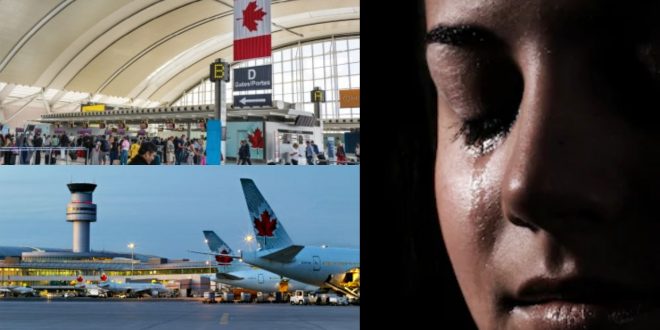 Lady in tears as her boyfriend she helped get to Canada leaves her the same day he arrived.

A young woman is in tears because the good deeds she did for her man went down the drain.

According to her in a letter to a relationship counselor on Facebook, her boyfriend was deported from Europe some years ago and she did everything possible to get him a Canadian visa.

On the day he arrived at the airport, another woman picked him up and for two weeks now she has not set eyes on the man.

read the letter below.

“Hello Osigwe how are you doing? Well, I do hope you can chip in one or two for me.

My fiance was deported from Europe about twenty years ago and since then he has been doing nothing in Benin City.

When he was about twenty he was caught shoplifting in Europe and that was how he was deported and damaged his travelling documents.

Since then I would come over to see him in Nigeria a couple of times, I have assisted in setting up businesses for him on different occasions, he always ended up going bankrupt so we discussed and he said it was better he comes over to join me in Canada. That was how I started a tedious process of getting his travel documents ready. It took me about a year with a huge budget.

Finally, months ago his papers came out, I still went out of my way to pay his ticket, send him money for logistics and other things he needed to put in place before coming.

Two weeks ago my fiance arrived in Canada and to my astonishment, another lady came to pick him up.

Since then till now I have not seen him. This was the same person that said he knows no one in Canada.

Please how do I get my man back? any special way I can reach out?