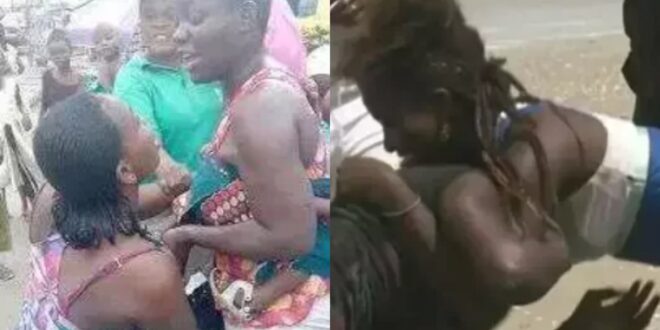 Lady beats her mother because of her boyfriend.

Residents of Oyugis town in Homabay county were treated to a lively dispute when a fight erupted between a mother and her 24 year old daughter.

The eyewitnesses claim the battle erupted after the daughter accused the mother of gaining big from her boyfriend who came home from Botswana for Christmas. The girl suspected her mother of infecting her boyfriend with Gonorrhea.

Neighbours from the neighborhood claim that they saw the two battling earlier this year in public.

This year, in August, the two argued over a third year student at Maseno University who had initially dated her mother before switching to her daughter.

When confronted about the event, the man who comes from Nyang’iela in Oyugis and is reported to be employed at the Sugar Factory in Botswana refused to comment and fled in his Toyota Starlet.