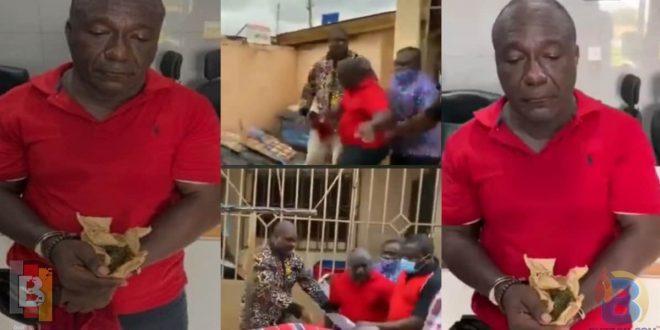 As Usual, the Ghana police service has tested the NDC Pastor, Prophet Owusu Agyei to identify whether the substance(Weed) they found on him is one he has been using or it was by accident it came to his possession.

Following the test, the results have been leaked and the pastor has tested positive for Tramadol and THC but negative for cocaine and other hard substances.

Prophet Owusu Agyei was initially busted in the middle of an interview after he threatened the state.  After his arrest and he miraculously had weed on himself.

he was remanded because of the weed they found on him and has been tested to see if he do hard drugs. Unfortunately, He tested positive to two substances; tramadol and THC (Tetrahydrocannabinol).

THC, or Tetrahydrocannabinol, is the chemical responsible for most of marijuana’s psychological effects. It acts much like the cannabinoid chemicals made naturally by the body, according to the National Institute on Drug Abuse (NIDA).