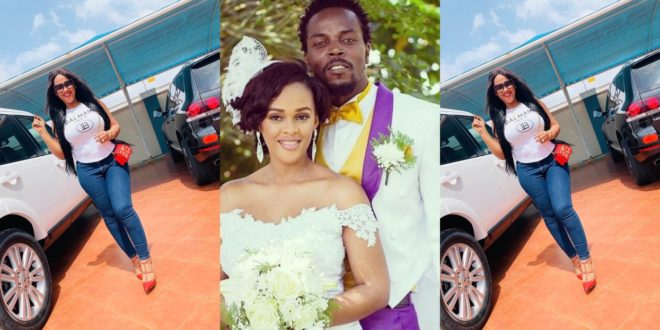 Nana Pokua is the beautiful wife of veteran rapper, Emmanuel Kofi Botchwey aka Kwaw Kese, and this morning, she has shaken social media with stunning photos and people can’t stop talking.

The photos saw the efiewura actress in the compound of their house as she flaunted some wealth – apparently to prove her days as an actress and her husband’s music career is paying off.

Doris Nana Pokuah – as she is known in real life – was seen wearing a pair of jeans and a white t-shirt. She then displayed two powerful cars as she posed in the middle of her mansion.

Among the cars were a white Range Rover, which she stood closer to, and a Volkswagen Touareg. After sharing the photos on Instagram, it has gathered many reactions from social media users.

Nana Pokua and Kwaw Kese have been together 4 years (2016) know after the rapper and his first wife, Ann divorced in 2014 due to cheating on the side of Kwaw Kese.

She has a kid with the rapper but in 2018, they lost their unborn child to a heart complication. The actress also had two kids before tying the knot with the ‘haters’ singer.