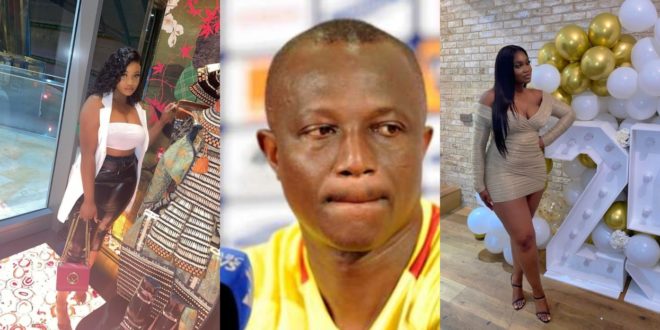 Marypeal Approach, the last daughter among the three daughters of former balckstars coach, James Kwasi Appiah has recounted she nearly lost her life prior to her recent birthday.

Marypeal turned a year old yesterday, 25th October and social media was awashed with birthday wishes to her. the birthday girl on the other hand also took to her wall in celebrating herself.

The now 25-year-old daughter of Kwasi Appiah, while celebrating herself, revealed she was at the point of death as she gave great thanks to God for her life.

According to Marypeal, she was admitted at the hospital at the beginning of the week after suffering a severe illness and she never thought she could make it to even witness her 25th birthday.

“I’m honestly soo grateful for my life. To think the beginning of this week I was admitted to hospital and didn’t know if I was even going to be able to even be well enough to celebrate my birthday to having a WHOLE 3 day Birthday!?? GOD you’re actually amazing! #25onthe25th 🙏🏾❤️”

The above was a caption to a stunning picture Kwasi Appiah’s daughter shared on her instagram page to celebrate this special day in her life.

Meanwhile, buzzgh.com has taken the pain to sample 10 stunning pictures of the Marypeal as she celebrites her birthday day and we invite you to take a look at them.