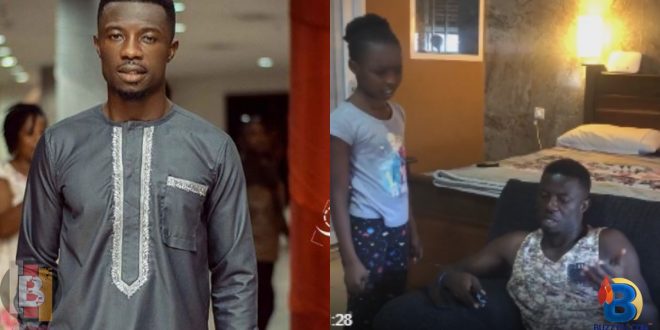 Kwaku Manu features his daughter in a new hilarious comedy

The Popular Kumawood actor by name Kwaku Manu aka Bob sika has got his fans laughing out their hearts after releasing a new comedy skit which he featured his daughter.

In the skit, The young girl identifies as the eldest child of the actor and called Maame Vida asked her father why he ate his food so fast early in the morning, But Manu was not happy with the question and ordered the girl to be quiet and not ask further questions.

her daughter continued to ask again if the father happened to have urinated in bed. According to her, people who eat more and fast early in the morning are known to have wet their beds at night.

Kwaku Manu not looking happy with his daughter’s interrogation slammed her and asked her to pack the bowls away and leave his presence.

Ever since he posted the video on his Instagram page, Ghanaians have been flooding his DM with comments with the majority using laughter emoji.