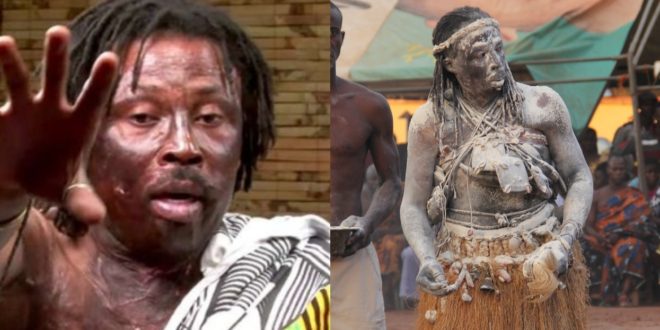 Popular fetish priest Kwaku Bonsam has prophesized that his powerful gods are going to grant him to victory in the forthcoming 2020 general elections for him to become the first ‘rastaman’ member of parliament.

Speaking on Accra-based Okay FM, he streesed that he is kicking out incumbent Augustine Collins Ntim and seting a record in the history of ghana as the first dread-headed MP.

On why he decided to venture in to politics, the Fetish priest  pointed out that his desires to become a member of parliament stemmed from his will to change the political narrative of Ghana.

ALSO READ Kwame A Plus: I Will Lead Nigeria’s Kind of Protest In Ghana If Nana Addo Wins

Kwaku Bonsam mentioned that the idea occurred to him on his way to a funeral when he saw some women happily waving cedi notes they claim was distributed by a Member of Parliament.

In a bid to clear corrupt politicians and bring dignity to the game of politics, he believes he has to join the house of legislators, for which he has successfully filed his nomination.

Claiming to have already built four markets, he was confident that his good works will speak on his behalf.