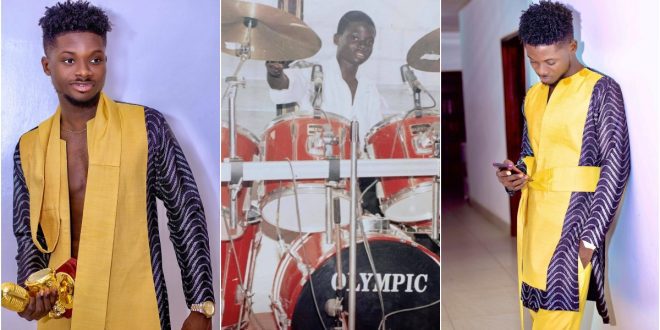 The Ghanaian highlife and afrobeat singer, Eugene Kwame Marfo with the stage name of Kuami Eugene recently shared a picture that proved he was into Gospel before he switched to the secular world. In the picture, Young Kuami Eugene was seen sitting in front of a church drum.

Kuami Eugene had a passion for music even at his childhood stage. This led him to sing in the church from a very young age where he also learnt how to play the drum, keyboard, and guitar.

Kuami Eugene dropped out of school because of his love for music and spent more than two months studying music in a studio located in the Eastern Region without informing the school authority and his mother. He was later expelled from school after it was discovered that he had skipped school.

Today he shared memories of those days in a picture he shared on his Instagram page. “Money Changed Me. Buh The Church Made Me. #SonOfAfrica”, he wrote as a caption to the picture he was seen playing drums.