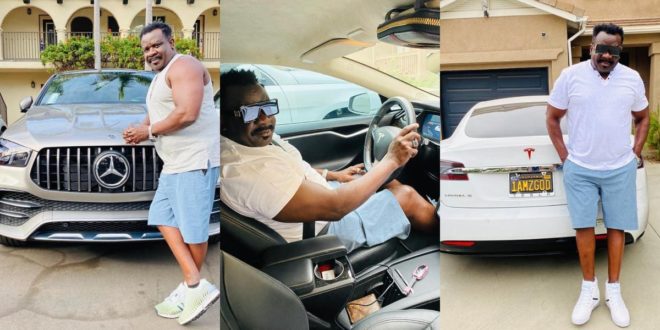 Veteran Ghanaian actor, popularity known as Koo Foribof the popular Efiewura TV series has flaunted more wealth despite lossing most of his properies in ghana.

Recalling, the actor made headlines after news broke that his home had been totally razed by fire days after celebrating the death of his late wife.

Sad videos that emerged showed the entire premises of the once beautiful gutted by fire and also had destroyed a lot properties worth millions.

Well, it happens Koo fori is back to his usual self when talking financially as he has flaunted some wealth just a month after the catastrophic incident.

Taken to instagram, the veteran shared picture of him abroad as he cruised in posh luxery Cars – a Benz and a Tesla. He also subtly kept his plush house on display.

Some of the pictures also showed him ridding a private watch believed to be his and he has gotten people talking about his riches.

See some pictures below: