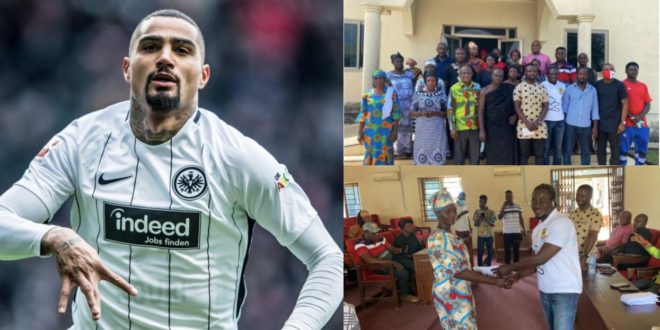 Former Black Stars Midfielder Kevin Prince Boateng has been touched by the recent accident that claimed the lives of some Offinso footballer as he has come to the aid of the bereaved families.

The gory accident which occurred on 19th September 2020 claimed the lives of 8 who were all young footballers of African Vision Academy from Offinso and were returning from a registration exercise in Kumasi.

The International footballer, after learning this sad incident has donated sixteen thousand Cedis (GH¢16,000) to families of the late young players. The donations were made on Saturday 31st October 2020.

The amount was divided equally for the families as representatives of Kevin prince Boateng handed GH¢2,000 to each.

Boating, 33, who now plays for the italian club A.C Monza also promised to help the surviving footballers from the accident.

The MCE of the area, Solomon Jessi together with the beneficiary, thanked kevin Prince Boateng for his act of kindness and generosity and also prayed for him to succeed in his endeavors.