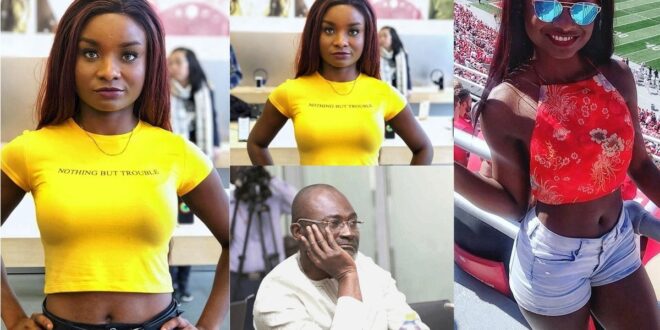 Anell Agypong, the daughter of Kennedy Agyapong is perhaps the most popular of all the children of the Assin South MP.

However, she is the one Kennedy Agyapong refers to as the Prodical child and it even looks like he has disowned her in some way.

Anell and her mother had a public fight with Kennedy Agyapong, saying words not fit to be spoken to a man against Kennedy.

Kennedy in turn responded with equal measure how they insulted him, Anell later apologized but Kennedy Agyapong stated in a radio interview that he will not forgive her.

Anell in a series of new Instagram posts has released half Nak3d pictures of herself. These are part of the many reasons his father does not like her.

see the Photos Below.

According to Kennedy Agyapong, Anell is now stranded in the united states after giving herself to men and also dong drugs.

In a radio interview, the Assin South MP revealed that his daughter is now begging to even eat and it is all because of her disrespectful nature and the training of her mother.