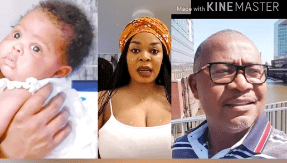 former AIDS AmbassadorJoyce Dzidzor Mensah has shockingly revealed she is pregnant again after she recently gave birth two months ago and her baby daddy disappearing.

Controversial Ghanaian socialite is currently not reaching her baby daddy, Mr. Stephen Ampofo as it is believed he has blocked her ever since they were to name her two months old baby.

with that not settled, Joyce has disclosed in a Facebook post that she is one month pregnant again for the same man who is on the run, and her test proves it.

‘Hmm, the problem is that I’m even one month pregnant for Mr. Stephen Ampofo again. God, please help me out. When I’m out of this mess, I’ll not repeat it again.‘ she posted on Facebook

social media users have reacted to her post as many are encourraging her to hold on to the Lord.