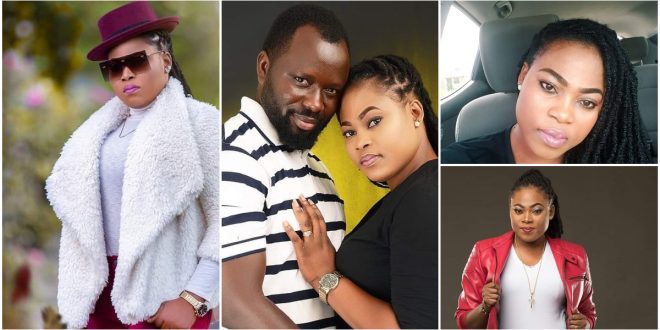 Joyce Blessing’s estrange husband, Dave Joy has descended heavily on the former manager of the gospel musician, Kwasi Ernest for pointing out that dave is the cause of why the Julie Jay issue has escalated to this uncontrollable level.

Kwasi Ernest took to an interview and said that the unhealthy feud between Joyce Blessing and Julie Jay could have easily been resolved if Dave Joy and others had paid more seriousness.

Ernest – who was the manager of the musician prior to Dave managing her – was speaking on Peace FM’s Entertainment Review show and he went ahead to lament the fact that such a matter has been allowed to escalate which would get Dave infuriated.

ALSO, READ Mzbel Breaks Down on social media After Losing her Unborn Twins

Well, Dave Joy in his response to this comment descended on the former manager and called him out for failing to call to check up on the issue but now pretending to care.

“Have you ever called me as regards this issue? Why then do you sit on the radio and speak in that manner? Tell the whole world if you have called me on this matter. You do not like my wife more than I do. I have children with her so don’t paint that picture,” a furious Dave Joy said.

Meanwhile, the whole issue that emerged following the break up between Joyce Blessing and Dave joy has gotten to an extent which is proving very difficult to calm down.

Recently, the gospel musician – who constantly blames Julie jay, her former publicist for causing her failed marriage – involved curse on Julie Jay as heard in audio which went viral. Julie jay also replied using a verse from the bible in cursing back on social media.

She took to her Facebook wall to write the Bible quotation Psalm 109 which reads:

“for wicked and deceitful men have opened their mouths against me; they have spoken against me with lying tongues. … Appoint an evil man to oppose him; let an accuser stand at his right hand. When he is tried, let him be found guilty, and may his prayers condemn him…”