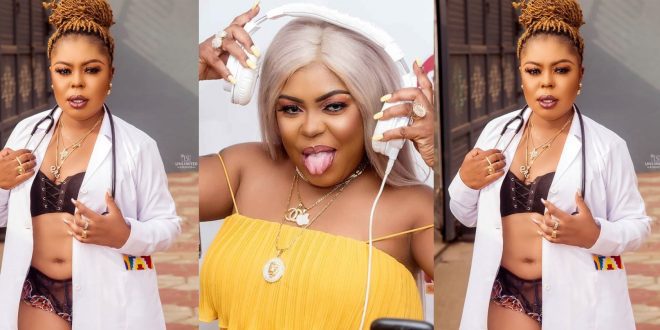 ‘I’m Single And Not Searching’ – Afia Schwarzenegger Opens Up

The self Acclaime queen of Ghana comedy, Afia Schwarzenegger has revealed his relationship status to the public and his fans are shocked as they cannot believe it.

The mother of three revealed that she is still single but she enjoys being in that state as she is not ready to search for love.

This her decision not to search for love can be linked to her passed terrible relationship experience which she went through when she was married to Lawrence Abrokwa.

Lawrence Abrokwa who was her husband then took videos of her(Afia) and uploaded it online hence disgracing her. Issues about their marriage ended in court and subsequently, Afia won the case.

She revealed her relationship status while sharing a photo of herself clad in a beautiful African print on Instagram.