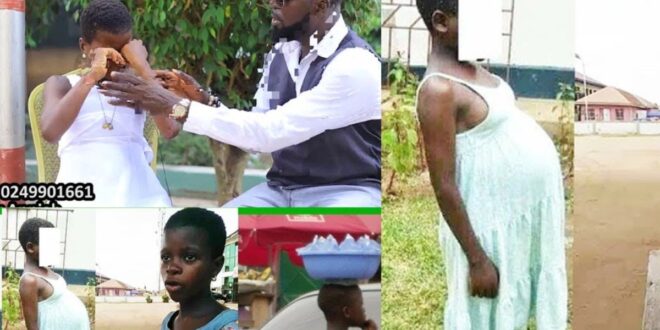 Afia, a 13-year-old girl, has described how she was raped and became pregnant by a man named Emma.
According to Afia, she was at home when she was summoned to run an errand for a man named Emma.

Afia said Emma instructed her to go out and buy food and water for him, and when she arrived, he told her to take the food to his bed.

Emma locked his door and forcibly slept with Afia, a 13-year-old, with his mind full of evil.

Afia said the man ordered her not to alert her mother, and she didn’t tell her until she saw any signs and symptoms on her.

Afia said she was depressed much of the time before her mother took her to a hospital near Komfo Anokye in Kumasi for a screening, which revealed she was pregnant.

Since her scan test revealed that she was pregnant, Afia told her mother what Emma had done to her. When Afia’s mother learned what had happened to her daughter, she attempted to apprehend Emma, but he had a forenotice and fled.

Doctors also told Afia that she would have to have a Cesarean section because she has narrow ribs and hips and is short.

When asked how her classmates treated her in school, Afia said she was ridiculed by many, which makes her uncomfortable and has led her to sell sachet water on the market.

Afia is the eldest of her mother’s three children and the only sibling. Since their father died a few years ago, her mother raised them on her own.