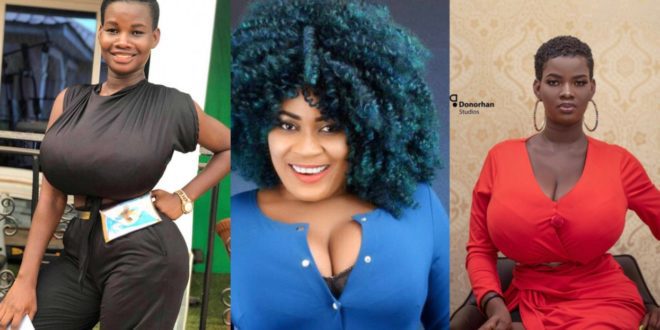 Ghanaian actress and social media model, Pamela Odame has revealed she holds everything against her colleague actress Nayas 1 for hosting an interview with Nana Tornado which brought out some damning allegations on her.

it could be recalled that the interview that was granted the controversial these got him revealing that Pamela used to be a prostitute who once extended her services to him years ago in Osu.

Tornado went on to say that he fell for her but had to dump her after finding out that she was a big-time liar who pretended not to be a Ghanaian and also being unable to speak the Twi language.

Well, Pamela Odame has for the first time opened up on this issue and she has gone all out to attack the host but not Nana Tornado. Speaking in an interview, the heavily chested actress denied ever getting intimate with Tornado and went on to say that Nayas 1 has failed to protect her as a friend.

According to her, Nayas should have brushed the issue off when Tornado started due to the relationship they shared. “Will Nayas sit unconcerned for someone to make false allegations about her biological family member?,” she quizzed.

Pamela Odame however went on to She stress that her friendship with Nayas won’t be the same. “She (Nayas) did not regard our friendship so I won’t regard her as my friend anymore,” she added