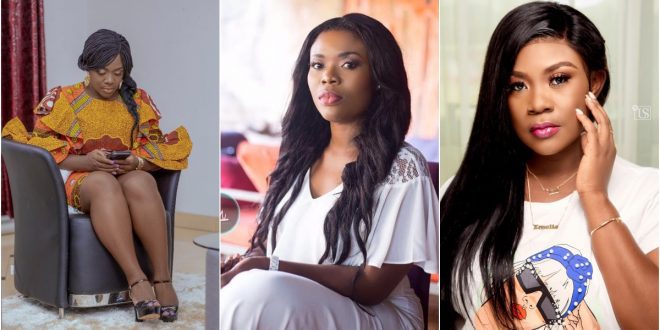 Kumawood actress, Emelia Brobbey is lamenting for not listening to the advice of popular TV show host, Deloris Frimpong Manso who is widely known as Delay on matters relating to her marriage.

Emelia Brobbey was previously married to Dr. Kofi Adu Boateng, who is reportedly the founder of End Point Homeopathy Clinic. The Kumawood actress and her former husband tied the knot in a spectacular romantic wedding in 2010 and divorced in 2012 following allegations of husband snatching accusations and a cheating scandal.

In a recent interview with Abieku Santana on ‘Atuu’ on UTV, the actress admitted that she was very much in love and that made her blind and deaf to the extent that she could not see and hear anything so paid deaf ears to Delay.

In her submission, she said;

“When one is in a relationship with his or her loved one, you do not listen to what people say. Because you are focused on the relationship. Delay said her version but because I was intoxicated with love I did not listen to her.”