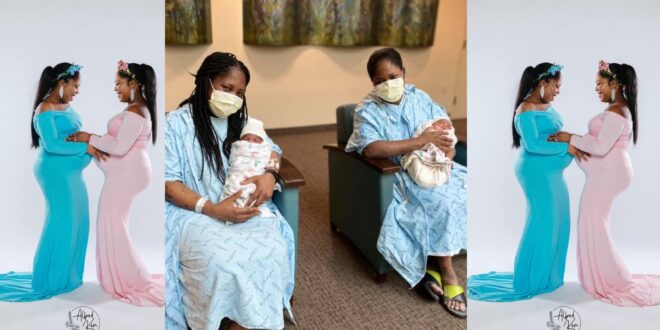 Identical twin sisters give birth at the same hospital within hours of each other.

Despite not intending to have children together, Kehinde Adedayo and Taiwo Aluko, both from Texas, got pregnant around the same time in June of last year.

They went into labor at the same time last week and were transported to Texas Health Harris Methodist Hospital Southwest in Fort Worth.

Adedayo was the first to give birth, and she gave birth to a healthy daughter named Zoey who weighed just over 3 kilograms. Sister Aluko was next, giving birth to her son Tony 28 hours later, measuring just a few pounds less than his cousin.

Neither of the sisters might have considered seeing their kids so close together, according to CBS DFW.

“I wanted to surprise Kehinde and have my little girl bring her the positive pregnancy test when she was least expecting it,” Aluko told the station.

“Little did we know, she had the very same surprise planned for me when her two year old son brought me her positive test at the same time that evening.”

“We were both surprised and ecstatic to embark on this trip together,” Adedayo said.

According to Shelby Jones of the network, even the hospital’s nursing team are taken aback by the coincidence.

She told CBS DFW,”It’s rewarding to serve as an extension of people’s families during the pandemic,”

They aren’t the only twins to have pregnancies that overlap. Brittany Deane, 33, gave birth to her first child, Jett, last month, with the help of her identical twin sister Briana, who is also pregnant and due soon.

Since the couple married identical twin brothers Josh and Jeremy Salyers, 35, their children will have a much stronger bond because they are genetic twins.