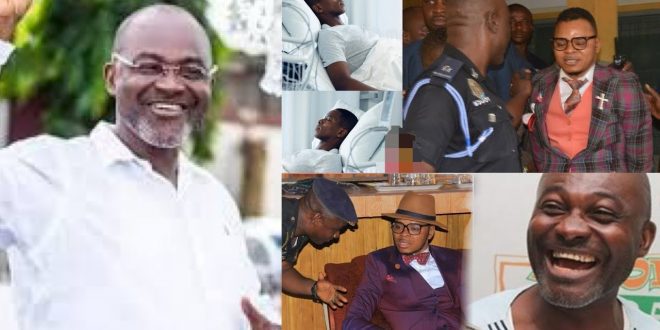 Member of Parliament for Assin Central, Kennedy Agyapong, has stated that he is willing to go to the ends of the world to see the founder of IGWG Bishop Obinim kept in prison.

We recently reported that Kennedy Agyapong was the main force behind Obinim’s recent arrest by the CID of the Ghana police service. He was charged with offenses of Publication of false news and Forgery of documents.

Well, Kennedy Agyapong has admitted reporting Bishop Obinim to the Ghana Police Service for supposedly indulging in shady deals and other criminal acts in a recent interview with Net 2 TV.

He also disclosed that he got irritated after Obinim told him that he will set aside one whole year to deal with him which gave him the motivation to investigate the controversial pastor.

ALSO READ  Gossip: Kennedy Agyapong runs from home at 4am to escape death after bragging

“I have shown you one sense. You threw me a challenge. I reported and took the witnesses there. You said you will go one year with me. But I am going four years with you to see who has real God in him. That is what I want Ghanaians to know”, Kennedy Agyapong said.

According to the parliamentarian, he is relentless in his bid to expose and have all fake pastors in the country face the full harshness of the law. he added he is not resting until especially Obinim is seen behind bars.