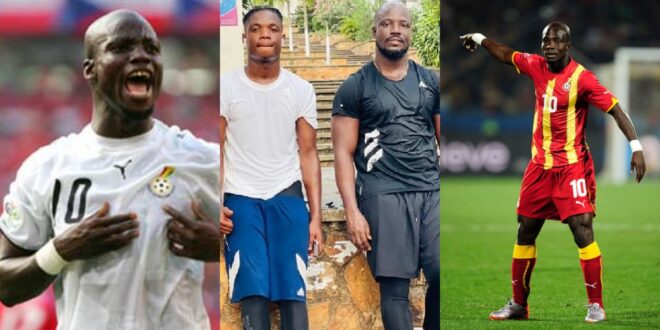 Rodney Appiah, the second son of Ghanaian football legend Stephen Appiah, says he is mindful of his family’s footballing history and is determined not to sully it.

The 19-year-old midfielder has just signed with Great Olympics, and if he impresses, he might make his debut for them in the Ghana Premier League soon.

Because of his father, the youth has been on the radar since the beginning of the game. Stephen Appiah is without a doubt one of Ghana’s most illustrious players.

He not only had a great club career with Parma, Juventus, and Fenerbache, but he also guided Ghana to FIFA World Cup qualification for the first time in the country’s history.

ALSO READ  Jealous boyfriend takes back the wig he bought for his girlfriend after he found her cheating.

His son is mindful of the eyes on him as he attempts to duplicate his father’s accomplishment, and he knows that he has to strive harder in order to uphold his father’s reputation.

“I need to work extremely hard because I’m playing with older people, people who are more experienced and stronger than me so I just need to work very very hard,” he told 3Sports in an interview.

“I will try my best to do better than him (my father), play well on the field so that I don’t destroy our name or anything like that.

“He (Stephen Appiah) just keeps telling to have fun on the pitch. that I should just be myself and should not try to be like him,” Rodney Appiah concluded.