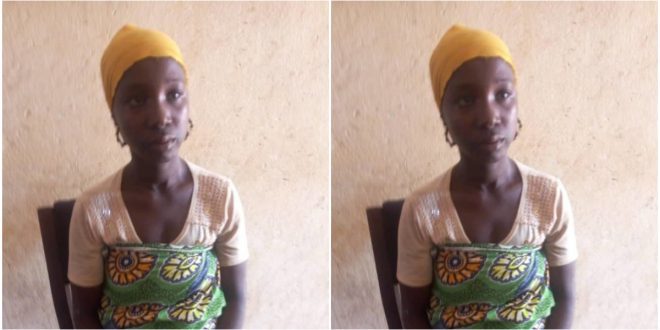 A 36-year-old woman identified as Fatima Sani has according to reports been arrested for allegedly stabbing her mother-in-law to death.

according to reports, Fatima who is pregnant took the life of her husband’s mother, Aishatu Umaru, 70 after they had a misunderstanding in the Mashegu Local Government Area of the State.

Fatima who confirmed what she did disclose that she has regretted stubbing her mother-in-law to death and will name her unborn child after her.

How did the misunderstanding between you and your late mother-in-law start?
The misunderstanding started on the day I got married to her son, Sani Umaru, in March 2009. His mother did not hide her objection to her son’s marriage to me. Although my husband was madly in love with me, his mother swore never to allow the marriage to work. In fact, from the time my husband defied his mother’s threat not to marry me, there was no love lost between me and my mother-in-law.

Every small matter was easily amplified into a major issue, resulting in a quarrel and physical combat in many cases. She mounted pressure on her son to take another wife. She described me as a good-for-nothing woman so that her son would leave me for another woman. She even threatened to curse her son if he failed to end his union with me.

How many children do you have?
I got married to my husband in 2009 and we have three children. I am six months pregnant now. I was living in peace with my husband’s two other wives. I am his last wife and his other wives accepted me and helped me when I came and that helped to move the family forward. All of us were happy as one family. But the greatest problem I had in my marriage was my mother-in-law, who did not want me in that family. My greatest joy was that my fellow wives were giving me support to deal with my mother-in-law’s hatred for me.

Why did you stab her to death?
Since I came into that family, I had not known anything called peace; every day was spoilt by my mother-in-law’s trouble. There was nothing I did that pleased her so I decided to stab her to death so that the problem would be over.

What led to her death started when she accused me of calling my first son a bastard. I was shouting at my first son to go to Islamic school as he was almost late and the teacher would not tolerate that; even my mother-in-law was aware of it. She called my husband on the phone and said I was calling his son a bastard. Out of anger, my husband sent me out of the house without hearing from me and I went to stay in my father’s house for two months. During the period, I did not hear from my husband and I kept thinking about it every now and then.

My mother-in-law had a pathological hatred for me; she swore that my marriage to her son would not work. Even my parents had reported the matter to our village head, telling him to contact my husband to find out from him if he was no longer interested in the marriage so that he could divorce me and I would be able to move on with my life.

On April 23, 2020, around 3pm, something came upon me; I took a knife and went to her room. I saw her sleeping; she was on the bed with my third son, Naziro. I shifted my son away from her and stabbed her to death. It is unfortunate.

What were the reactions of the other wives?
They knew that my mother-in-law never liked me and she instigated her son, Sani, to divorce me. They did not show much reaction because they knew what I had passed through in the name of marriage. In fact, they were sorry for me. For 11 years, I knew no peace in my marriage just because of somebody who did not want my marriage to succeed. It is too bad we have found ourselves in this society; may Allah help us.

Did your husband eventually divorce you?
Despite what happened, my husband has refused to divorce me because he loves me a lot. He even ignored my family’s quest to end the marriage if he was not interested. He feels sorry that I am still in detention despite my condition (being pregnant). I know he is taking his time to sort things out at the appropriate time.

Do you regret stabbing your mother-in-law to death?
Yes, I regret my action; I feel like killing myself. Irrespective of what had happened, I shouldn’t have done that. I know I have done something that even Allah will not forgive me for. Honestly, I couldn’t imagine myself committing such a wicked act. I didn’t believe that I could stab my mother-in-law over our misunderstandings. I pray the family finds it in their hearts to forgive me; it was done because of extreme provocation.

Will you go back to your husband’s house if his family forgives you?
Of course I will because I have my children to look after. After all it has happened; all we have to do now is to find a way to move the family forward and pray to Allah to forgive everybody. It was a mistake; it can happen to anyone that is pushed to the wall like me.

Do you know that you can be sentenced to death?
I know it is a murder case and I know the implications of what I did. The law can take its course. The truth is that my mother-in-law did not want me to have peace in my matrimonial home; Allah should settle everything and may Allah be praised. I am begging the state government to temper justice with mercy and consider my condition. When I deliver my baby, if she is a girl, I will name her after my mother-in-law. I will name her Aishatu; that was my mother-in-law’s name. It will show I’m remorseful.