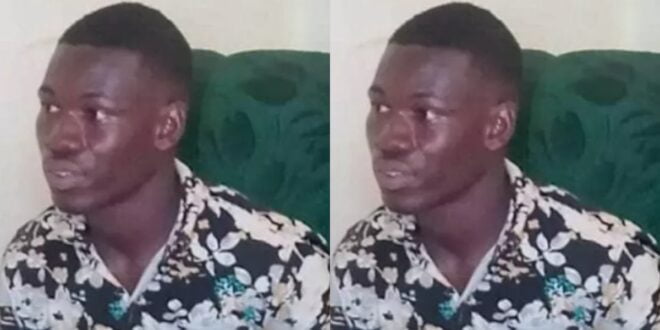 Patcik Nyarkoh, a 20-year-old SHS student, defiled two 18-month-old twin sisters in a heinous crime that has landed him in police custody.

The young man says that a dark spirit compelled him to do so and that he was not in charge of his actions.

“Their mother left them with me in my room while I was charging my laptop. After being arrested and crying profusely, he said, “I fell asleep in no time and before I knew, I had sex with the younger of the twins and I think I was possessed by an unseen evil spirit to do so, and I am begging for forgiveness.”

According to sources, the incident occurred in Nsuta, in the Central Region’s Assin South District.

The twins’ mother had left them in the possession of Nyarkoh, a co-tenant, as she went out to get some groceries.

When she returned, the kids were no longer in her bed, so she went to check on the perpetrator.

Her children were there, oblivious to the fact that the man was pretending to be sleeping.

According to the mother, one of the young twins pointed to her vagina before pointing at the man.

The children were rushed to the hospital for an examination, which revealed that they had been defiled, and the perpetrator was apprehended.

When he was apprehended, he sobbed and blamed his conduct on mysterious dark spirits.

He’ll be arraigned in court for his offences, and I don’t think the evil spirit tale will help him when he’s in front of a judge.