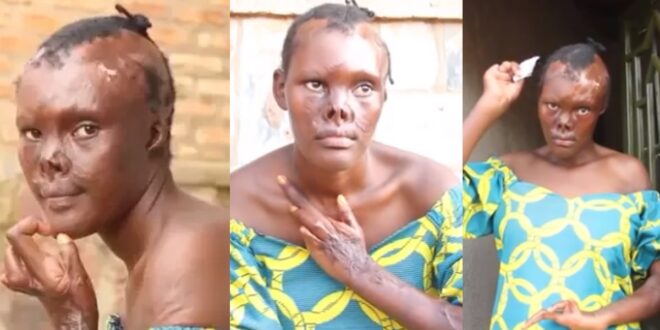 A young lady who was severely injured and deformed as a result of the fire outbreak has made the headlines, and she is here to tell us about what happened before and after the disaster. Life has not turned out the way she had hoped.

She was then humiliated at school and began to lose faith in life because she believed that life had no value for her.

She felt her life was over and no one would love her because of her deformity.
Favor is a 2-year-old girl who was burned when she was younger.

She told her mother about it and told her all that had happened.
She became very self-conscious about her predicament.

One of the things that bothers her the most, she claims, is when parents threaten to give their children to me for punishment if they misbehave.

Her friend used to inspire her, but it was just for his own benefit.
He eventually got pregnant and was suspended from school as a result.
She has been a school dropout since then.

This is a heartbreaking tale, but she is courageous enough that she has found a way to live happily and views herself as desirable amid all of the stigmatization and ridicule.
Let’s take a look at the video below.