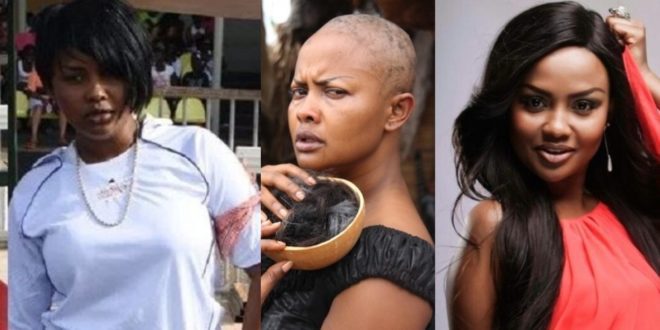 Actress Nana Ama Mcbrown recently took to an interview with Fiifi Pratt on Accra based Kingdom Plus FM and she detailed all the struggles and challenges that befell her way during the days she had not kick-started her movie career and also wasn’t a star.

One of the touching stories was when Nana Ama Mcbrown narrated how she used to sell second-hand clothing (popularly called ‘foes’ in the Ghana language) with her mother in Ivory Coast despite not securing a settlement there.

According to the actress who doubles as the United showbiz Host, She and her mother would have to gather the stuff to be sold from Ghana and she had to drive all the way from ghana the francophone country just for it to be sold and return back to Ghana.

ALSO READ  (18+) Nigerian Girl With The Biggest ‘Vag!na Wall’ Flaunts It To The World And It’s Quite Shocking - Video

Nana Ama Mcbrown also said in the course of the interview that she’s ever grateful for how far God has brought her in life after going through torrid moments in the past and finally becoming the Mcbrown we all know. Her story buttresses the usual saying that behind every success, there is an unseen hard work sacrifice and persistence.

The long and interesting interview took many turns. Matters corncerning the Selly Galley and Henewaa Piesie’s recent issue that has taken over socil media among other things were discussed. Mcbrown who has been in Selly’s shoes asserted that no one has a right to use someone’s predicament to insult them.

ALSO READ  Meet The Most Tattooed Man In The World - Photos

On the same platform, the Nana Ama Mcbrown who is obsessed with the love for her daughter said she wouldn’t hesitate to close down any school that beats her child after recounting the stress and struggle she went through prior to her childbirth.