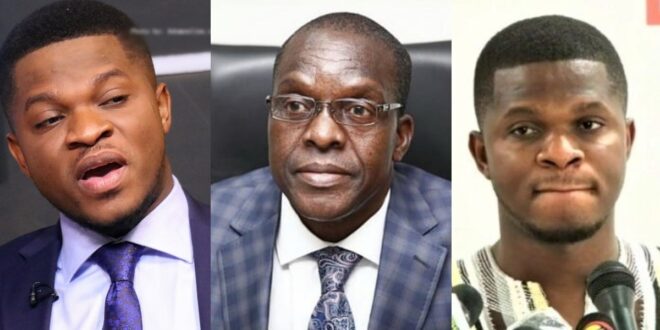 “I speak for the whole Ghana, not NDC”- Bagbin fires Sammy Gyamfi

Speaker of Parliament Alban Bagbin has confirmed that he is not in parliament to serve the NDC, NPP, or any other political group.

This comes after the NDC’s publicity officer, Sammy Gyamfi, accused several high-ranking members of the opposition, including Alban Bagbin, of betraying the party.

on Facebook Bagbin wrote “Comrades, the betrayal we have suffered in the hands of the Speaker of Parliament, Rt. Hon. Alban Bagbin, the leadership of our Parliamentary group, particularly Hon. Haruna Iddrissu and Hon. Muntaka Mubarak, and dozens of our own MPs, is what strengthens me to work hard for the great NDC to regain power.

They brazenly defied the leadership of the party and betrayed the collective good for their selfish interest. And we, must not let them succeed in their parochial quest to destroy the NDC, the party that has done so much for them and all of us. The shame they have brought on the party will forever hang like an albatross around their necks.

his is the time for us to insist on the right changes in the leadership of the NDC group in Parliament or forget about them completely. The current leadership have lost their moral authority to lead and are not fit to sit on the front bench of the NDC side of the house.

More importantly, it’s about time we understood, that we don’t have any NDC Speaker of Parliament. No we don’t! We have a Speaker who rode on the back of the NDC into Office to pursue his own parochial agenda and nothing more. You trust them, at your own peril”

“Recently in the media, on social media, in particular, you have heard the blistering attack on me when I did not play any role apart from presiding [over the business of the house]”.

“Because I say I belong or came from a party, does he [Sammy Gyamfi] think I’m at the beck and call of the party?

“And, so, if you sit down and look at me and think that maybe you were my girlfriend before [and, therefore] I should give you an advantage over another who I’ve never met, please, then don’t come to me; you won’t get it. Let’s finish; after work, we can do that business together. Not when I’m working. That’s my nature; that’s how I’ve been up to this time and, so, it’s unfortunate that these things are happening”