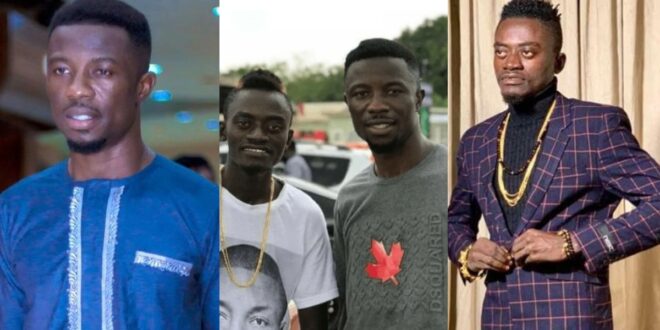 Kwaku Manu, a Kumawood actor, has confidently declared that he was the one who uncovered and launched his colleague actor Lil Win into the spotlight.

Manu said he met Lil Win several years ago and wanted to help him fulfill his dream of being a movie star because he liked him right away.

He expressed his dissatisfaction with Lil Win for shielding the facts from the public for too long.

According to a post spotted by Buzzgh.com on Celebritiesbuzz.com, Kwaku Manu made this disclosure in an interview with Kingdom FM.

He also said that he is well aware that Lil Win will continue to deny his disclosure due to pride.

Buzzgh.com, on the other hand, is unable to verify Manu’s assertion.

When the Kumawood movie industry was thriving, the two were often seen working together in a variety of films.

They drifted apart at one point and remained at odds until Lil Win officially apologized about two years ago.

Lil Win pleaded with Kwaku Manu to put the past behind them and reunite as one;

ALSO READ  "I will stand by you like the wall of Jericho" - Akuapem Poloo's mother says.

“Legends The Late Bob Santo & Abusuapayin Judas… @kwakumanubob this is how GHANA wants us to unite and build a better movie industry,” he wrote.

“Together we can … And forgive us, as we forgive those who trespass against us… 111666 Bob segger,” he added.

“Lilwin went on to ask movie producers and directors to unite him and Kwaku Manu instead of setting them against each other”.

” Kwaku Manu replied Lilwin’s apology as he wrote: “@officiallilwin As You already know, I’m always ready even today, Tomorrow or Anytime So You Can let me know when you’re also ready one love.”