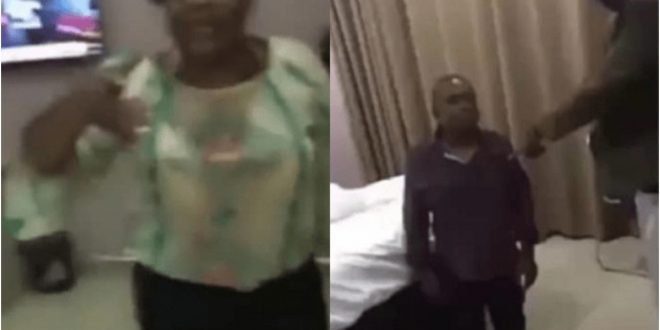 A man yet unknown threatens to kill his cheating wife’s boyfriend upon catching them red-handed making out in a hotel room.

In a recent video wide spreading on social media, one can clearly see that an unknown man was threatening his wife’s boyfriend after being able to track them down (his wife and the boyfriend).

He tailed the two as they entered in a hotel which they had booked. according to the man, he believes that day wasn’t the first day as they had already booked the hotel so just went straight into one of the rooms.

He devises a way to get in the room and he saw them making out. The wife immediately started begging together with the boyfriend who was kneeling. The distraught husband told the boyfriend of his wife he has the right to kill him.

ALSO READ  'I need a Virgin man to marry, all bills on me' - Beautiful Lady Announces (Screenshot+Photos)