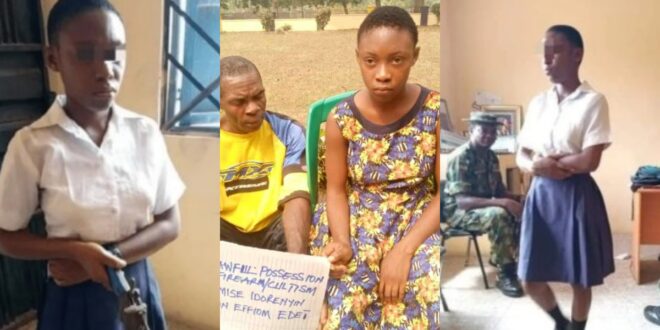 “I got the gun from my boyfriend who is married with 6 children”- SHS girl who went to school with a gun to shoot her teacher speaks.

The breaking information on the Nigerian high school girl who was caught with a pistol planning to kill her teacher is that she allegedly got the gun from her boyfriend, a married man with six children.

Remember, buzzgh.com posted this story here on our site and stated that, because the teacher forced her to cut her colored hair, she was so furious that she decided to end her teacher’s life.

A recent clarification on this case is that the girl confirmed that she is a cultist and that she dates one Okon Effingham who is married to six children and has been detained by police as well.

An article on Yabaleftonline.ng adds that the police found that she was carrying the locally produced double barrel gun to a blacksmith following her capture. On Friday, Feb 19, when being paraded, she told reporters that her boyfriend, whom she has been intimate with since August 2020, is the gun’s owner.

She proceeded to add that with a variety of items, the guy supports her but is not responsible for paying her school fees.

Furthermore, she said that her mother allowed the man to sleep in her bed. 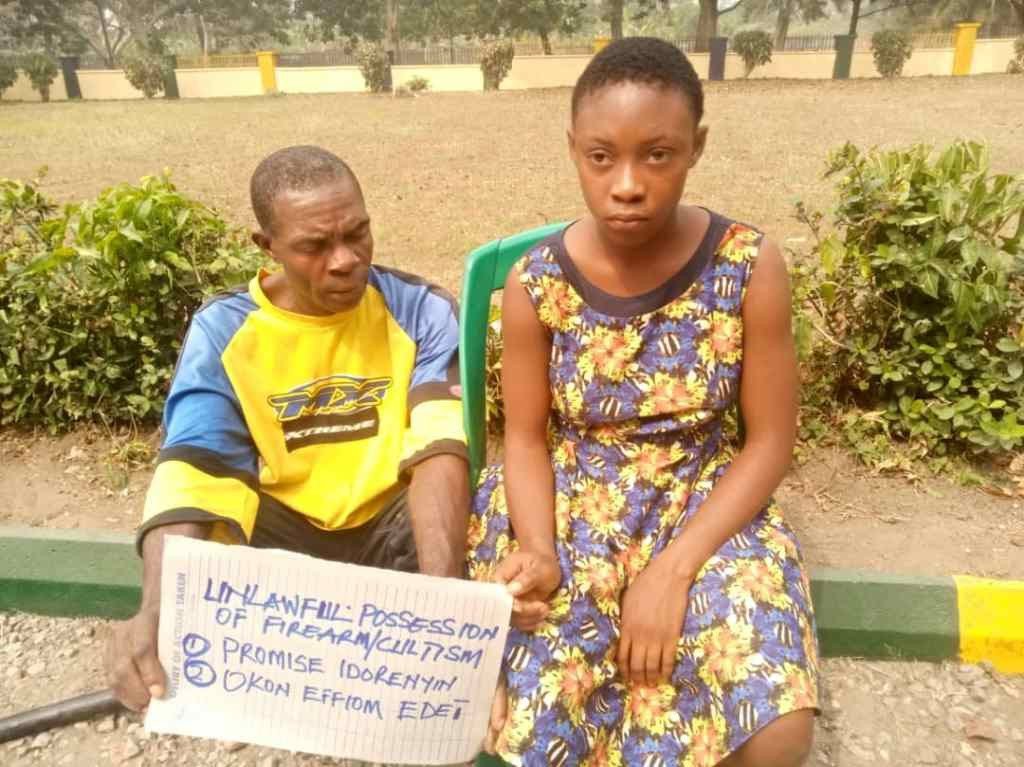 Speaking at the headquarters of the Police Command, Diamond Hill, Calabar, when she was paraded alongside her friend who owns the locally produced pistol and 11 others for different offences, she said:

“I am a member of Sky Queen Confraternity, I am just an ordinary member, I don’t hold any position in the group, I have known the owner of the gun who is my man-friend since last year, he sleeps with me and supports me with little things, but he is not the one paying my school fees.

“My mother knows about him because he visits me at our house and sometimes he sleeps over at my place because I have my own room, then in the morning he goes back to his own house.”

“I am a married man with six children, I did not give her the gun, she took it herself where I kept it under the bed.

“I started sleeping with her August last year, her mother knows me, I have been doing small something on her head, they know she is my wife.”

On Friday, Cross River Police Commissioner Sikiru Akande told  Journalists that the investigation was underway to uncover the mystery around the possession of the weapons, adding that Okon Effiong was detained and further information will soon be made public.

The Police Chief has called on parents and guardians to develop the practice of becoming closer to their kids and wards in order to realize what they are doing and who they are mingling with.