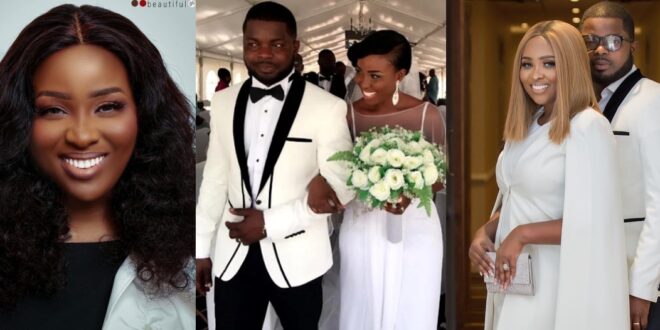 Adwoa Saah, the former host of the Adom TV show, has confirmed that when she found her new partner, they decided not to have sex before she was walking down the aisle.

Adwoa saah has recently revealed in an interview that she gave her husband a dirty slap after he made moves to her wanted to sleep with her before marriage.

She went on to say that her husband never tried to sleep with her again until putting the ring on her finger.

The television personality said in an interview with Nkosuohene on Omega Live TV:

“There are some things that make men come chasing women, cloth yourself. Sustain and abstain. Even the Bible says, refrain from sexual activities before marriage, don’t do it.

Some people say, oh you have to check and see if the man’s ‘thing’ is accurate or sexually compatible but some people have used and used it but still couldn’t find the compatibility. They had gone on to marry someone he’s not had that with before.

My husband never saw my nakedness before marriage and I wasn’t a virgin. I didn’t give in to him because, at the time, I had gotten a deep understanding of God’s word.

Whoever comes into the Lord becomes a new creator and the old things have passed, so if I am doing new things then I have to go the Christlike way with my husband.”

Watch her interview below;