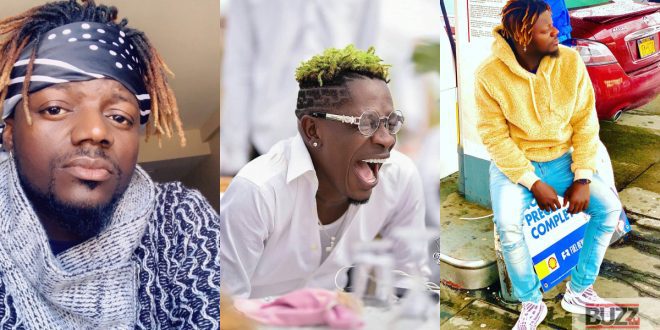 “I am no longer friends with Shatta wale but I will not reveal his dirty secrets”- Pope skinny.

Pope skinny and shatta wale were once very good friends but due to reasons best known to only the two of them, their relationship fell out and they are no longer friends.

According to pope skinny, he and shatta wale did some nasty things when they were friends and he knows a lot of secrets about him but not been cool with shatta wale does not give him the mandate to share his secrets.

he was speaking in a radio interview with Amansan Krakye on Radio Central in Cape Coast when he made these revelations.

“That’s a very deep question. Throughout my friendship with Shatta Wale, there are things that we did that we have vowed never to reveal even now that we’re no longer friends.

“Though we’re not friends again I don’t hate him, I still love him but I don’t wish to be back with him.

“Off course, I’m a human being and I do regret sometimes but those things are within me which is personal and I wouldn’t like to disclose secrets that I share with Shatta Wale”.

he was also asked if he wil go back and beg shatta wale to take him back, this was his response.

“Anyone who will suggest that I should go and beg Shatta Wale for forgiveness is senseless because I have not wronged him.

“I came out as a mainstream artiste before him but his bad side is that he can’t keep close friends for a long time”.

“He has rather offended me. He has been sending people to come and beg me on his behalf but me I’m not ready for him right now”.