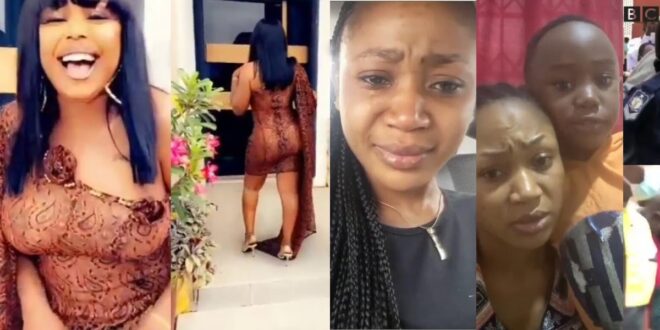 Prior to her 90-day jail sentence on Friday, April 16th, 2021, Afia Schwarzenegger was seen as the odd one out in the clamoring request for the #FreeAkuapemPoloo movement on social media, which was quite active.

The number of threats and insinuations directed at her on social media has been staggering, yet as is customary for her, Afia Schwar still fights back and defends herself.

In a live video viewed by buzzgh.com, the comedian revealed that when Akuapem Poloo posted the nude photo of herself and her son on social media last year, she called Akuapem Poloo on the phone and advised her to apologize to Ghanaians for her behavior, as well as offering her a helping hand by stating that she would talk to her lawyers about acting as counsel for her on pro-bono terms if they could help her.

Poloo, she claims, came out publicly the next day to say that her gesture(picture with her son) was an artistic impression and that she does not understand why some Ghanaians are insulting her for her stance towards Akuapem Poloo.

Afia claimed that she did what she was meant to do as Poloo’s big sister during the early stages of the event, but that people turned Akuapem Poloo against her and did not take her advice, resulting in her plight in court yesterday.

ALSO READ  'F()0Ls!! Anyone who thinks living Abroad is hard doesn't know what they are saying'- Twene Jonas
Share