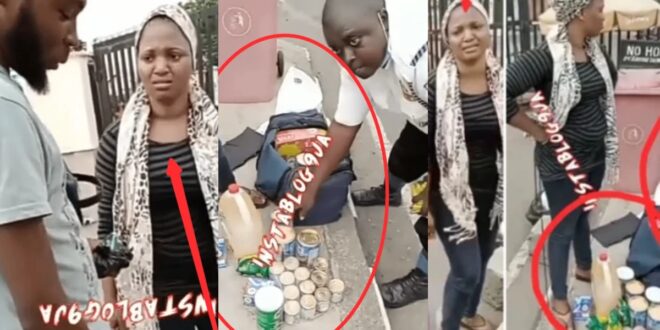 Because the security guard spotted her with this, the housegirl started pleading for forgiveness.

Aside from hard work, a homeowner can look for two other characteristics in a housekeeper: honesty and trustworthiness.

As a homeowner searching for house help, it is important to perform detailed research on anyone you want to employ, as stated in this post.

a video on Instagram shows  A house girl pleading with an estate security guard who is hell-bent on shaming her after finding her with stolen items hidden in her handbag in the video.
Among the items are sugar and salt bags, milk and chocolate cans, a gallon of fuel, and a number of other treats.

The security guard who spent too much time taking everything out of the house girl’s bag said he couldn’t let her go because the stuff she stole from her boss were too precious.

He insisted that his colleague photograph all the girl had taken, and then continued to alert all who would listen of what she had done.