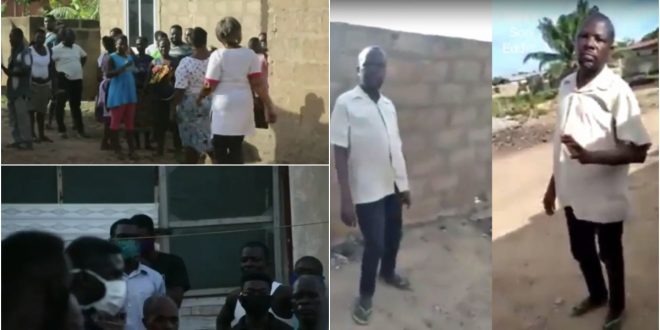 the passing of Evangelist Apreku a.k.a. Apraku My Daughter became a surprise to many as his video was even viral before his sudden death.

just as we reported that Apreku My Daughter has passed on, his close friend Prophet Kumchacha has also confirmed that.

though his demise is so sad, it’s also sad looking at his story from how he fell from his position as one of the topmost and richest pastors in Ghana and landed in becoming poor before his demise.

Apraku My Daughter was the founder and leader of the King Jesus Evangelistic Ministry International, he was one of the leading pastors in Ghana in the late 1990s into the early 2000s.

Evangelist Apraku had over 25 church branches with some located in the United States, Switzerland, and the Netherlands during the early’s of his ministry, but lost all his churches within the space of a year to his junior pastors.

well, in 2018, Apraku disclosed in an interview that he traveled abroad to evangelize and also open church branches in other countries which he spent about a whole year abroad.

The late Apreku while in his absence left the affairs of his church into the hands of his deputy leader and other junior pastors but they took away the churches and made the churches their own within that one year.

Kofi Adoma in confirmation of this story stated that Apreku lost everything because of his illiteracy.

Aside from his Junior pastors taken over his churches, Kofi Adoma Stated that Apreku is a kind-hearted man who gave out all his cars and other properties to people, and even in his hardship times he gives out what people give to him to those who need it the more.

Kofi Adoma also added that one reason Evangelist Apreku lost everything was his involvement in politics.

according to Kofi Adoma, Apraku’s involvement in politics ended him in a brutal beating by some solders which he ended up losing two of his front teeth.