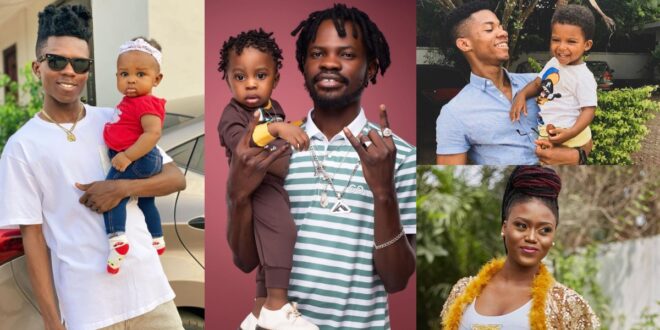 We have some well-known top celebrities in Ghanaian who are not married but have a child or children.

Peter Famiyeh, also known as Fameye in the entertainment industry, is a talented singer from Bogoso in Ghana’s western region who now lives in Accra.

Arvid Fameye Junior, Fameye’s first child, was born a few months ago to Fameye and his girlfriend.

Nobody realized Kidi’s son had a sibling before he was two years old. When Kidi showed off his adorable baby boy when he turned two, the reaction was shocking.

Young rapper from Kumasi with a lot of talent. Strong Man and his lovely girlfriend Ama welcomed their first child, a son, this year.

ALSO READ  A Plus blast lil win for using Bosom P-yung's song "Ataa Adwoa" for advert without his permission.

While having been together for a long time, they have not yet married.

Shatta Wale ended his relationship with Majesty’s mother Michy. No one suspected Shatta had a daughter when she was eight years old. He also has kids with other women.

Ethel Esi Eshun is a Ghanaian musician who was born in Cape Coast and now calls Accra home. Queen Eshun revealed in an interview with Zion Felix that she has a son, whom she gave birth to before becoming a mainstream artist.