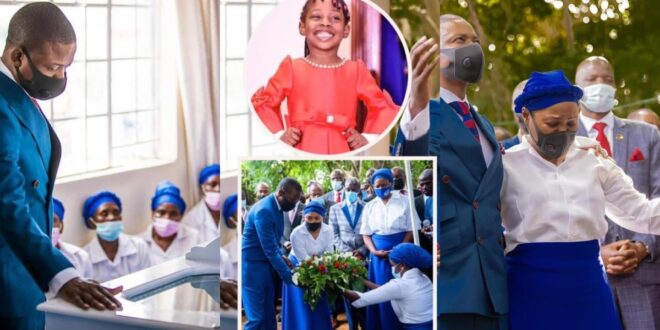 we announced the death of 8-year-old Israella Bushiri, the daughter of famous Malawian prophet Prophet Bushiri, on March 29, 2021.

After months of combating the disease, Israella Bushiri died of a lung infection. The funeral service for the famous televangelist’s daughter was eventually held, and it attracted thousands of spectators to the venue.

Thousands of people gathered to say their goodbyes to Israella Bushiri, a rising lady of God with a lot of promise.

Prophet Bushiri, who is still full of hope and faith in God, posted images from the funeral ceremony online, writing:

ALSO READ  Date Rush is a scam, Raymond exposed to have two girlfriends by a guy who lives in his area (screenshot)

“Yesterday on Thursday (1st of April, 2021) the Prophet’s family, sons, and daughters together with people from different dominations escorted Saint Israella to GLORY where she is with the Father in heavenly PLACES.

“She was born on Christmas Day, a time of celebrating the birth of Christ, and she has gone back to the Father during the Easter period, a time of commemorating the death and resurrection of Christ. Her message was simple: “God works in mysterious ways.”

“Truly He does work in mysterious ways. We love you our Angel. Rest Well Israella and God bless you all for being with us during this time.”