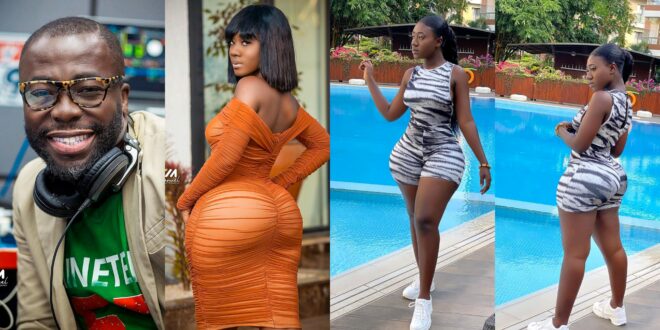 Hajia Bintu in trouble with Andy Dosty after she breached an appointment.

Hajia Bintu is now the hottest female video vixen in Ghana after she featured in a song Shatta wale made for her.

Hajia Bintu rose to fame after Ghanaians fell in love with her huge backside on TikTok, since then, she has gained dominance on other social media platforms.

It is clear that her huge a$s has propelled her name to fame and riches, she is now been sort after by musicians to feature in their music videos.

Celebrated show host, Andy Dosty has disclosed that he wanted Hajia Bintu to feature in a music video that he was making but hajia disappointed him big time.

ALSO READ  I want to be a Nigerian, Ghanaians don't appreciate made in Ghana - sister Afia

According to andy dosty, he called hajia in the morning to ask if she will be available and she agreed to meet up with him to discuss the terms and conditions as well as the price she will charge.

Andy revealed hajia told him she will come early in the morning before going to a wedding but she failed to show up.

Andy Dosty expressed his disappointment after he saw that hajia has ditched his music video to feature in Shatta wale’s song rather.