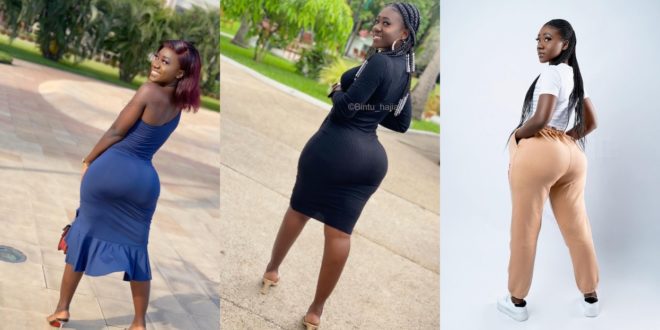 TikTok and Instagram Godddes, Hajia Bintu has been forced to react to an insult from a guy who allegedly proposed to her after her initial decision to ignore him.

This guy identified as Django on Twitter who was not happy with how he got bounced by Hajia Bintu on several occasions, came out hard on the well-endowed lady. He insulted the socialite describing her as a ‘Zongo girl’ in a Twitter post as he sought revenge.

Hajia Bintu remained silent until yesterday, Friday, 16 October after another Twitter user reminded her of the incident in the comment section of her recent mouth-watering pictures.

This Twitter user with the handle @Kelvin_Richkidd twitted “That nigga who said you look Zongo as Fuck! never lied” and his motive for this post still remains a mystery but for only him.

The Tiktok sensational could not let this one slide and had to reply with this humble massage that spoke sense into these social media users. She wrote: “It’s because of him am doing me thanks dear much love”