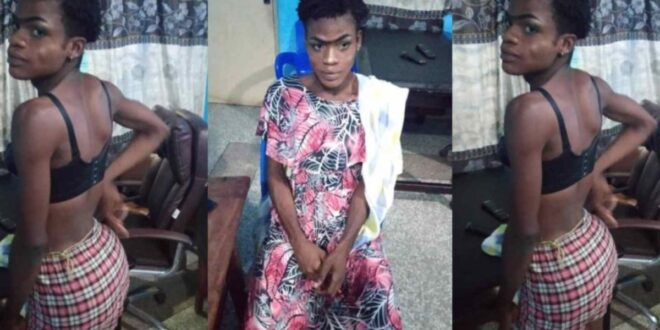 Patrick Jobe Asramah, a convicted gay man, was arrested by the Ghanaian police for planning to commit a crime that is illegal under Ghanaian law.

Patrick, the guy, was dressing as a woman and wearing lipstick while waiting for his gay partner when he was arrested. He was apprehended with the assistance of a Madina resident named Ibrahim Bawah, who led a police patrol team to him.

He was handed over to the Adentan divisional Domestic Violence and Victim Support Unit (DOVVSU) for “preparation to commit crime, namely” sharing unnatural carnal knowledge with his fellow man.

According to Bawah, he assisted the police in apprehending the perpetrator after interrogating him when he saw him disguised as a woman in GhanaFlag, a small town in Oyarifa. He went on to say that during questioning, he discovered the man was gay and looking for a ‘trumu’ girlfriend.