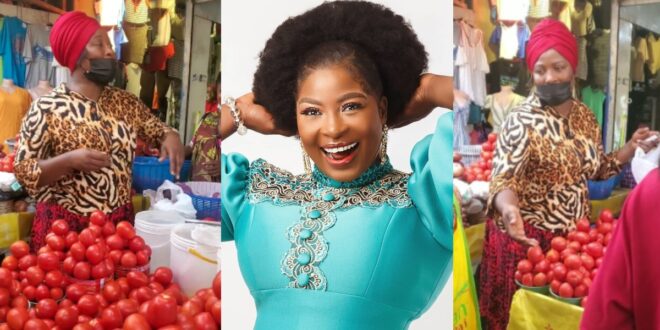 Gloria Sarfo, a Ghanaian star, is seen selling tomatoes at Madina Market in a viral video.

Gloria Sarfo was standing beside her trays full of tomatoes, onions, and other foodstuffs while asking on consumers to buy from her, according to a video captured by buzzgh.com.

She was clad in a blouse and long skirt, with a scarf to complement her current work title.

Gloria Sarfo has a quarrel with a Slay Queen tomato seller for snatching all the customers with her “beauty” in part of the video.

The video may be a scene from Gloria Sarfo’s upcoming film or a scene from her Angel TV program, according to netizens.

“When the JOB demands  Tomato Seller at Madina Market

Please come and buy from me, “na me Maame ab) ka”