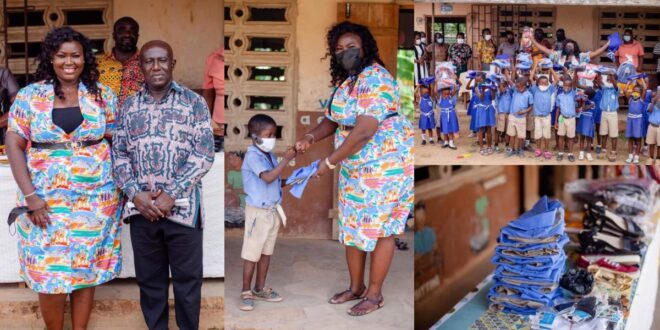 Gloria Lardi, a teacher provides bags, uniforms, and shoes for the students. (PHOTOS).

Gloria Efya Lardi, a dedicated and caring teacher, has chosen to brighten the faces of some of her students by providing them with school supplies to ease the pressure on their parents.

After painting the classroom, Efya Lardi given 10 school bags, stationery, 26 pairs of shoes, 21 pairs of socks, and some underwear for the girls.

“I taught kindergarten for five years and was in charge of all of these matters, such as purchasing uniforms, stationery, and schoolbags, because most parents struggled to afford these simple necessities for their children. This leaves the children sad once they go to school. I figured it would be prudent for me to act as their second parent while they were in my classroom.” She explained why she was assisting the children.

The students at the Bonya Presby Basic School in the New Juaben South Municipal of Koforidua in the Eastern Region couldn’t contain their delight as they smiled and took their new presents.

Have a look at the pictures below.